Saturday was a good day, starting early with our two grandsons who slept over with us Friday night when their parents went to the football game.  Recently, I bought some sprouted buckwheat grains because I love buckwheat.  I got up at 7:15 (Barbara and the boys had already been awake for at least an hour) so I could fetch the grain and grind it in my flour mill.  Then, as we agreed, she made buckwheat pancakes for all of us.  Never content with just one variation, she embellished the pancakes with fresh blueberries for the boys, and for her, a peach puree she made from local white peaches the day before.  Theirs were then doused with good amber Vermont maple syrup.

Being more of a traditionalist, who prefers savory to sweet in the morning (or almost anytime), I had everyone laughing hysterically (perhaps derisively) as I drizzled a little fine Spanish olive oil and Kosher salt on my pancakes.

After their parents came, ate some more pancakes, and left with the boys, I went to the farmers market in my town, which inexplicably does not begin until this weekend.  We old guys rested and napped for a bit after grandparenting, then went to a matinée of the new movie, The Butler, which we found very moving.

I had bought some good vegetables at the market, and we came back thinking about a big salad for dinner.  We already had excellent produce in the refrigerator to create a highly-varied set of great things to eat, plus some leftovers, so when dinner rolled around, we worked together to make a salad composée.  In the meantime I roasted the caps of 8 good-sized shitake mushrooms and gathered a few olives, marinated portobello slices, and thinly-sliced red onion, mellowed in a delicious local red raspberry vinegar.

Among the ingredients were:

Here’s how the plates looked with everything laid out. 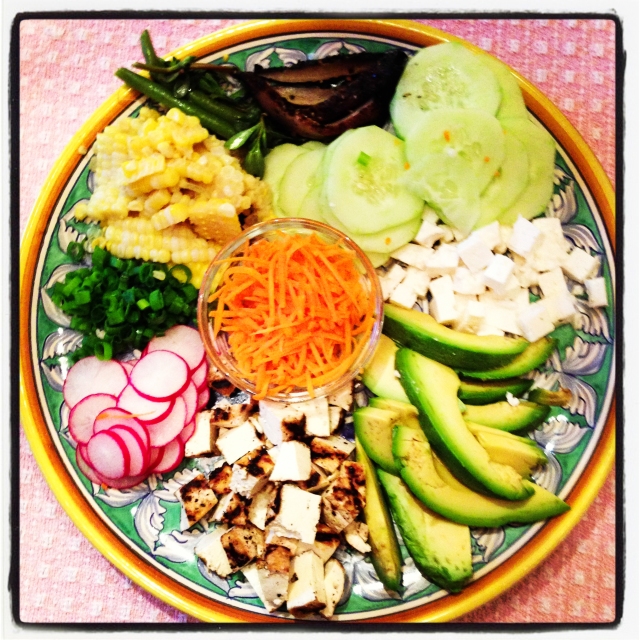 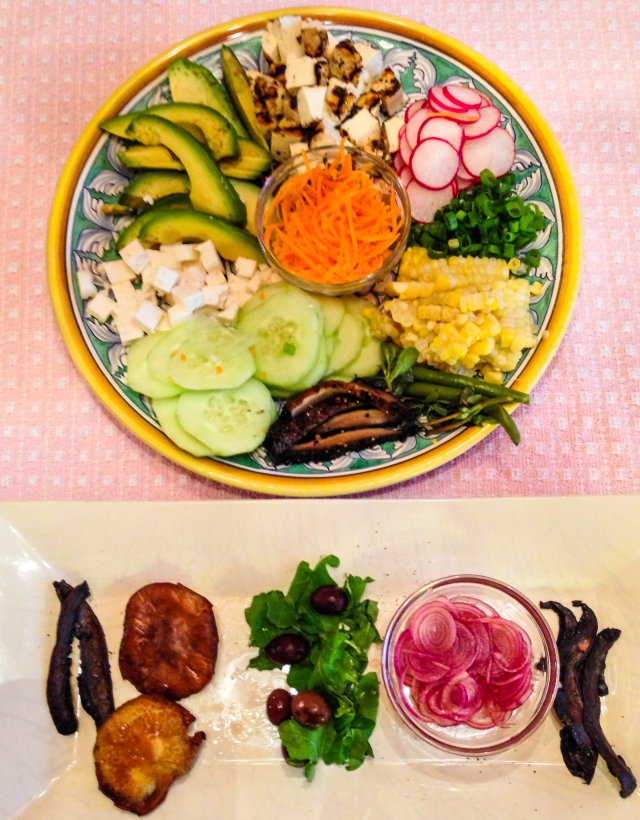 Barbara prepared the lettuce and a fine vinaigrette, and we filled up our plates to our own liking.  But the biggest winner of the evening was the wine.  Seven or eight years ago, I had been on the North Fork of Long Island, returning from one of my Wine 101 sessions I give annually at my alma mater, and I did some tasting at the Pellegrini Vineyard.  Several wines were good, but the one I found most striking was the 2004 Petit Verdot.  As many of you know, that is a red grape used often in Bordeaux as a blending agent in their Cabernet Sauvignon and Merlot wines, usually in quantities less than 5% of the total.  This wine was made as a demonstration of the winemaker’s artistry, and it was almost purely Petit Verdot (93%, plus 7% Cabernet Sauvignon).

Anyway, I had put it in the cellar and let it sit quietly all those years, aware of it but never finding the right occasion.  Last night, figuring that my usual Italian choices would be heavy-handed for the salad, and not wishing to go to a Beaujolais, I decided to try it.  Outstanding.  Vivid flavors of blackberry and tobacco, but nuanced and possessing a long finish, it provided much pleasure and a good complement for the meal.  Of course, now I wish I had bought a few more bottles, but c’est la vie.

Here are the specs: 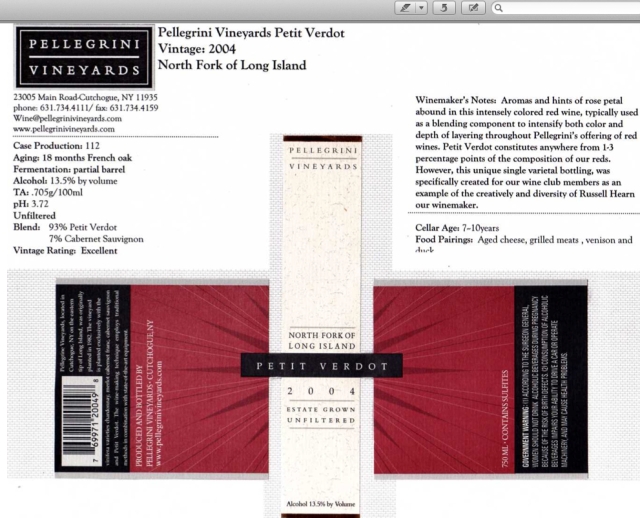 This entry was posted in Almost-Vegan, Family, Food, Wine. Bookmark the permalink.