During the past week I’ve been lax in the food photo department, so this entry is less organized and attractive than full meals I would normally document.  I’ve been as active and exploratory as ever, but I will ask you to use your imagination to picture the results more than usual.

For example, I found a package of Rancho Gordo  Yellow Indian Woman heirloom beans in my pantry, and I decided to cook up a batch.

Normally, I soak beans overnight and then simmer them with only an onion and bay leaf the next day.  However, these are such rich, creamy beans, I decided to try a more full-bodied flavor approach.  Using a recipe for Yellow Eye Bean Soup from the New York Times Cooking archives, I prepared the beans as below, in Step 1 portion of the recipe.

They were wonderful, as was the rich broth, too.  Having plenty of time that afternoon, I did some more research and settled on this Peasant-Style Risotto recipe in the book Fagioli, by Judith Barrett, a gem of a used book purchased from Amazon last year. 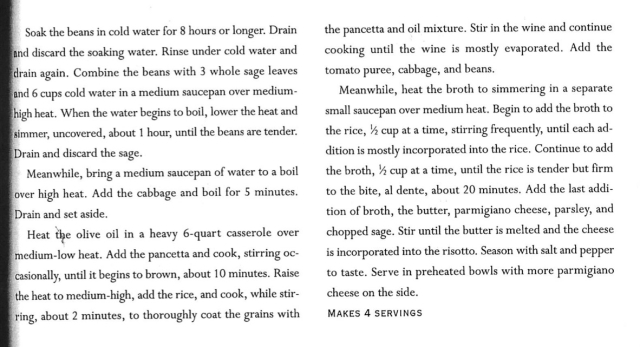 Borlotti are similar beans in color and texture, so I knew I was on the right track.  We had about 1/2 cabbage in the back of the refrigerator, so that was a good choice, and a little pancetta always warms the winter heart (and stomach) of this almost-vegan diner.  This risotto was perfect on a cold night for the two of us, and leftovers provided lunch for me today — although I felt the need from some crostini, as well.

I had baked two loaves of Tartine’s Country Style Bread this morning, so two slices with some heirloom tomato, diced and marinated with salt, pepper, olive oil, a little red wine vinegar, and dried Greek oregano was the perfect accompaniment.

While we’re on the subject of crostini, I have to tell you about two packaged products that gave me similar pleasure a few days earlier.  Another lunchtime, and I drew out of a carefully-wrapped package some rustic Italian bread, and some baguette slices — leftovers from Clear Flour bakery last week.  I had also made a white bean purée from cannellini beans, onion, garlic, and salt.  Just a little of the purée was still left, so I spread it on a slice of bread, topped it with a piece of roasted red pepper (Divina brand, from Turkey), and added a pickled caper leaf from Santorini.  Mouth-watering, and very fine with whatever white wine was open on that day.  Plus one large Puglian green Bella di Cerignola olive.

Yesterday was Barbara’s turn, and she rose to the occasion.  It was Super Bowl day of course, so she made an excellent vegan black bean chili with blue corn chips for our meal before the start of the game.  Two glasses of Pallagrello Nero (Silva Nigra from Cantine Rao) rounded out the mouthfuls.

Moral of these vignettes: one can do some marvelous culinary things with beans! 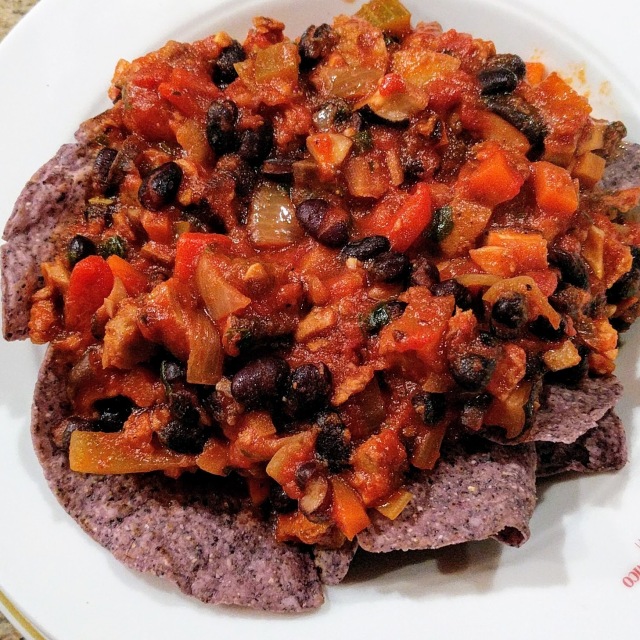