Ode to the Octopus

An octopus is a remarkable creature.  It appears to be one of the most intelligent beings on the planet.  It also happens to be a delicious and very healthy food, which is what initially interested me the most.

I have close friends who won’t eat octopus because they feel it’s wrong to to use them as food, and I have some respect for that point of view.  However, as a vegetarian/pescatarian, I don’t eat that much of it; the fishery appears to be quite sustainable; and it’s my favorite source of Vitamin B-12.  And it tastes great, when prepared properly — which is the subject of today’s post.

Like most of us we are quite constrained on our shopping these days, so I took advantage of an online resource — Browne Trading Co. of Portland, ME — to buy some seafood last week.  I have been to their store when I visited Portland in the past, and I know their products are outstanding.  One item was a frozen 3.5 lb. Spanish octopus, and today was the day I cooked it.  That required taking it out of the freezer yesterday and letting it defrost for 24 hours at refrigerator temperatures.  Fortunately, outdoor temperatures have been in the 35-44 degree range for the last few days, so I was able to leave it out on the porch to defrost (that’s my walk-in refrigerator.)

I’ve learned over the years that there are three major steps in preparing octopus for the table after defrosting:

I have had good luck with the first two steps by following this video by Jessie Schenker:

so that was my approach today.  In the past I found it difficult to maintain the 190-200°  poaching temperatures on the stovetop for over an hour, so I tried to be scientific and to use the oven — after properly calibrating the temperatures.  I filled a deep pot with hot water, brought to 195° F. on the stove, set the oven temperature to 200° F., and came back an hour later to see if the target temperature had been maintained.  Nice theory, but no luck.  The water in the pot had dropped to 176°, so clearly the oven was running 20-25° cooler than its setting.

Proud of my detective work, I figured the cure was to increase the set temperature to 220°.  I put the octopus and all the aromatic flavorings in the pot and put it in the oven, confident that it would be close to the 195°-200° target.  When I checked everything 45 minutes later, I was disappointed to find that it was still too cool.  My digital thermometer read 180°, and the octopus was not going to achieve the desired level of heat.  It was still underdone.

At this point the pot was on top of the stove, so I decided to use the burner instead, and to watch it carefully.  Over the next 45-50 minutes, I kept measuring the temperature in the pot, keeping it between 187° and 194°.  That seemed to work.  Removing the octopus from the pot, I checked the tenderness and decided it was done.  Immediately, it went into the bowl with olive oil and flavorings as a marinade and then left to cool the rest of the day.

After dinner I started to think about all the dishes I planned to make this week.  After all, there are 8 legs to work with.  One of the approaches I found in my research was this video by Eric Ripert, chef and co-owner of Le Bernadin, the spectacularly good seafood restaurant in New York.

Having marinated the octopus for more than 6 hours, I was ready to try it.  I took it out, cut one leg off, sliced it as Eric described, and followed his seasonings carefully. 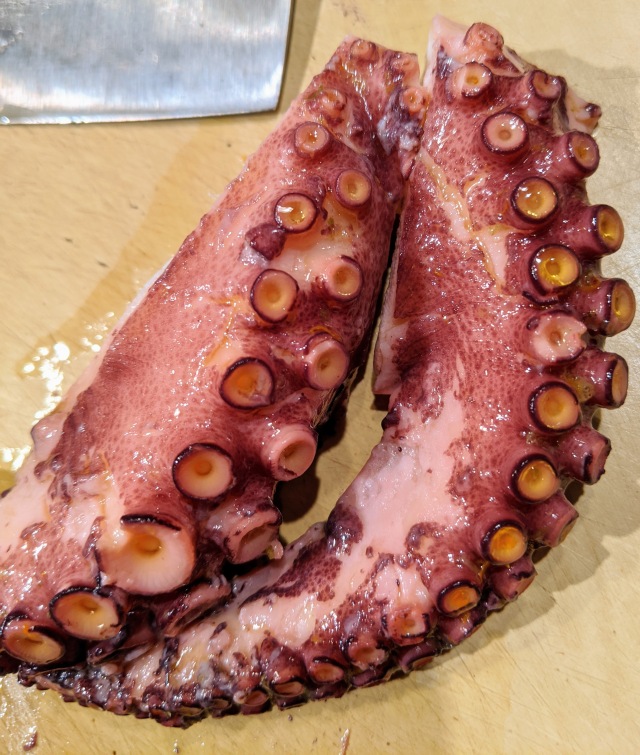 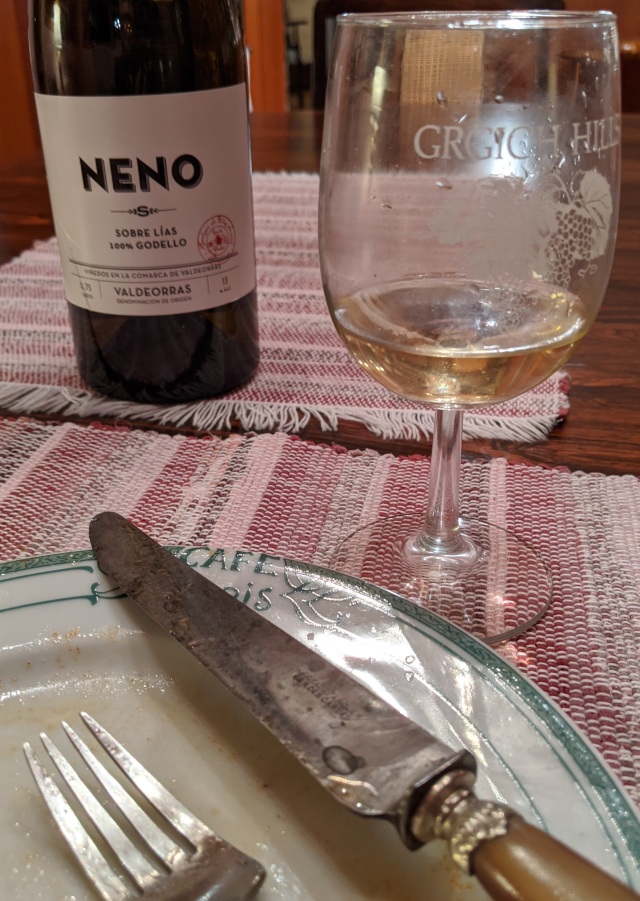 Perfectly marvelous!  I felt like I was enjoying a tapa in San Sebastian, accompanied by a very charming Godello.  Merci, gracias, Eric.

This entry was posted in Food, Uncategorized, Wine. Bookmark the permalink.