My relationship with all things Spanish is decidedly mixed.

On the one hand, we have the benefits today of the great food and wine for which Spain is appropriately famous.  Many of those glories have been the subject of posts in this blog.  For example, none of the meals I’ve made with the Spanish octopus this past week would have been possible without them.

On the other hand, we have a number of lessons from the history of Spain.  Most impactful from my point of view were the actions of the Spanish king and the Catholic Church in 1492.  While Americans are familiar with that date because the explorations of Christopher Columbus, 1492 was important in a different way for all Jews and Muslims in Spain.  Virtually all of those populations were tortured, killed, or forced to convert to Catholicism – and later expelled from the Iberian peninsula.  Jews had lived in Spain for about 1500 years, and they had enjoyed peace and prosperity during the Golden Age of Spain, when the Moors ruled from 711 to the late 1300’s.  That was a period of co-existence and collaboration among the three major religions, and it was a remarkable time of significant scientific, artistic, and economic achievements.

After the “Reconquista” Spain was a great world power, but its colonial success was marred by the brutal ways in which the empire destroyed indigenous peoples all over Latin America, while plundering their resources.  This part of the history was in the forefront of my experiences when I visited Chile in 2001 and Peru a year later – my first trips to South America.

Finally, people my age and a bit older have memories of the Spanish Civil War and the subsequent despotic rule of Generalissimo Franco in the years that followed.

You probably read this blog for food, wine, and travel information, so let me move on to those topics – now that you understand the background of my occasional ambivalence about Spain.  Having visited Barcelona several times, Galicia, the Spanish Basque region, Palma, Ibiza, Grenada, Gilbraltar, Priorat, Montsant, and Tarragona — all in the last 24 years — I do now have an appreciation for Spain and its many good qualities.

All of this is background to the final meal from a fine 3.7 lb. Spanish octopus purchased last week and documented in my last five postings here.

Once again the meal of interest was lunch, since I can make what I want and not disturb Barbara, whose food choices can be quite different than mine.  And — like yesterday — simple preparation was again the theme.   Today the design was Spanish, including side plates and other ingredients.  Yesterday I received an order of Spanish delicacies from La Tienda.  They included Padron Peppers (which you have seen several times here before) and Chorizo (a very non-vegan, non-Kosher treat I eat on rare occasions — like during a pandemic).

After removing the last leg and a half from the olive oil marinade, I charred it on a gas grill, coated it with a garlicky vinaigrette, blistered the Padron Peppers in a cast iron skillet, dusted the peppers with Maldon salt, plated the leftover green salad with radish from last night’s dinner, and thinly sliced some of the Chorizo as a side dish.  Since it was lunch I did not go all-out for Spanish wine.  Instead I chose to finish an open bottle of a orange Calabrian wine — Forse Sono Fiori — by CretaPaglia, one of Nick Mucci’s growers.  It was beautifully-matched to the vinaigrette.

Thank you, octopus.  You were great, all the way. 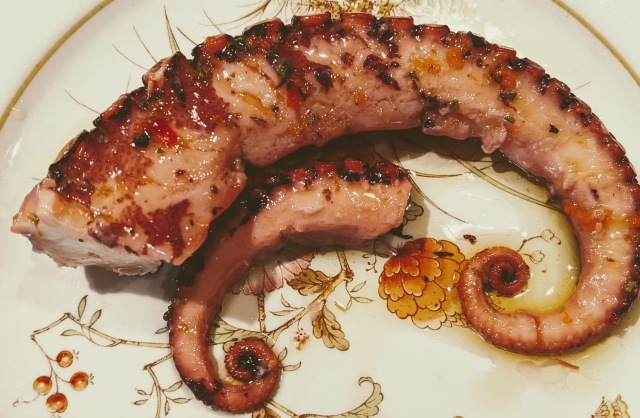 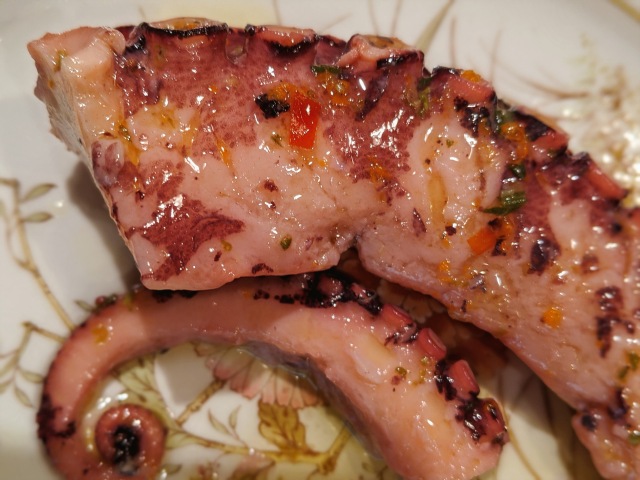 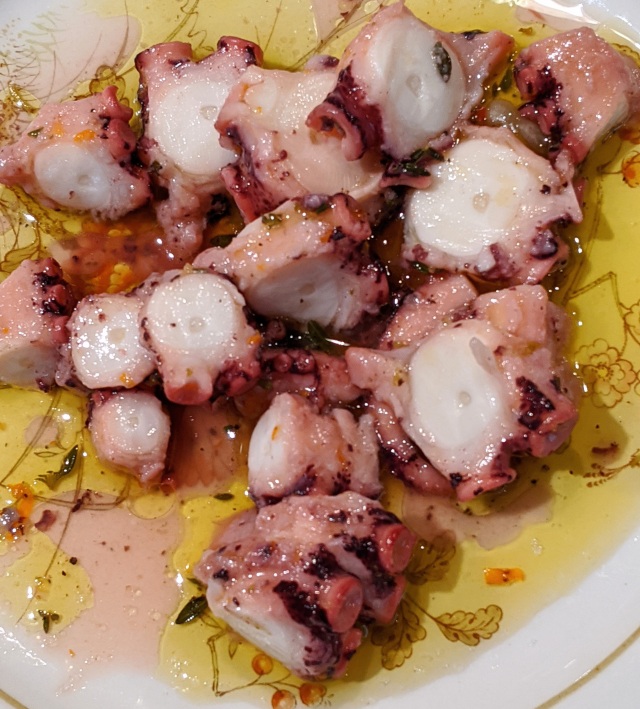 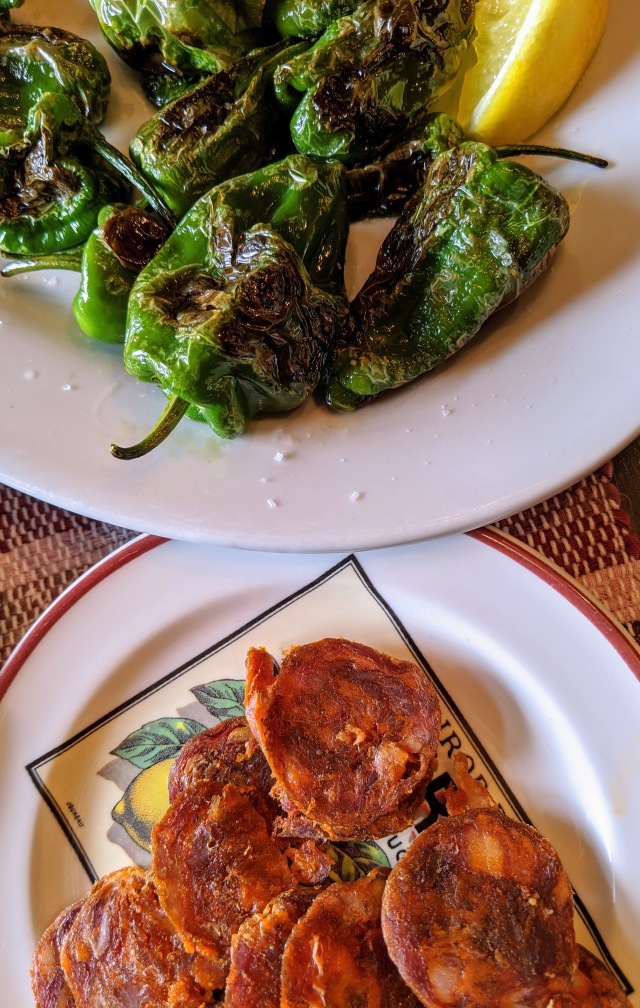 This entry was posted in Food, Travels, Wine. Bookmark the permalink.